Clydesdale Bank sealed a partnership with Scotland's ground-breaking new home of live entertainment, the 12,000-seat Hydro at the SECC complex in Glasgow.

The Bank will become Official Banking Partner to The Hydro and Scottish Exhibition and Conference (SECC). The relationship involves a five year, £15 million package which will be the sole bank funding for The Hydro development. The total development cost is £116million, and the remaining funding will come from the SECC's own resources together with grants of £15 million from Glasgow City Council and £25 million from Scottish Enterprise. 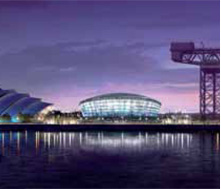 The SECC was established in 1985 and is one of the premier concert, event and exhibition centres in Scotland and the wider UK. The site will also be a key venue for the 2014 Commonwealth Games hosting six events, the media centre and international broadcasting headquarters.

The Hydro will be a dedicated entertainment arena for concerts and is due to complete later this year (2013). With the addition of The Hydro, the campus will be the only venue in Europe with purpose built concert, event, conference and exhibition space on one site, and will be one of the top five venues in the world in terms of concert attendance.

The company is 90 per cent owned by Glasgow City Council and is regarded as key to the local economy contributing some £300million to Glasgow annually – the addition of the new Hydro venue is expected to add an extra £130million to this.

How will the deal help to drive the business?

Peter Duthie, Commercial Director of the SECC, said: “We are thrilled to be working with Clydesdale Bank at such an exciting time for the venue. The Bank has an excellent heritage in Scotland with similar values to us, so having them as one of our official partners reflects the level of interest that The Hydro is attracting in securing such prestigious brands as partners.”

Peter added: “Clydesdale Bank is one of several high profile partners for The Hydro. It’s great to have the Bank working alongside us to support this remarkable venue. As well as being unique in terms of its façade, we’ll also be able to welcome artists to the country that we’ve never had the pleasure of seeing here before providing some really memorable moments for the people of Scotland.”

We are thrilled to be working with Clydesdale Bank at such an exciting time for the venue. The Bank has an excellent heritage in Scotland with similar values to us.

Never tell anyone a token 3 response code, even someone from the bank. You should only input these codes to our secure Business Internet Banking service when you’re sending and making payments. If anyone calls and asks for a token 3 response code or asks you to authorise a payment on the App for fraud checks, hang up and call us on 0800 085 2914 from another line if possible, remember the Bank will never ask you to disclose your security details.