Our banknotes through the years

A closer look at some of our banknotes

Since we first opened our doors on 7 May 1838 we’ve been producing our own banknotes. We’re now one of only three commercial bank issuers in Scotland. Here we look at our £5 notes from the 1950s and 60s and also look at the modern versions of our £5 notes. Our World Heritage series is currently in circulation which includes our polymer note. 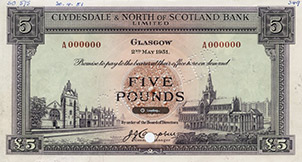 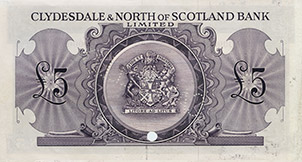 This 1951 £5 note was issued the same year that Clydesdale & North of Scotland Bank simplified its name and became Clydesdale Bank. These notes were bigger than the current notes and have few of the security features we now see on notes - this note has its serial number and some watermarks to protect it from counterfeiting. 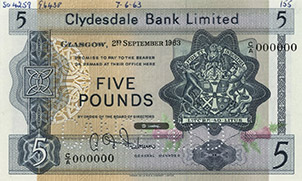 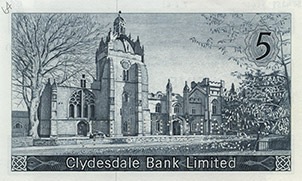 The 1963 £5 note was issued by Clydesdale Bank and has started to look a little more like today's banknotes. It features more intricate watermarks and more detailed printing to make it more difficult to counterfeit. The reverse of this note features an illustration of King's College, Aberdeen. 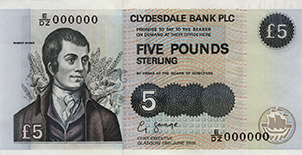 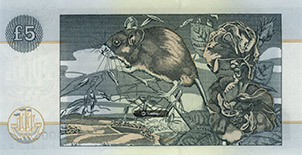 The Famous Scots features a five-pound note that depicts Robert Burns, one of Scotland’s most iconic and well-known poets. It also features a field mouse and a wild rose, in honour of two of his most famous poems, To a Mouse and A Red, Red Rose.

The World Heritage series was launched in 2009 to celebrate Scotland’s achievements. The series celebrates the best of Scotland's heritage, people and culture with the front of each denomination featuring a prominent and innovative Scot with the reverse of each note portraying one of Scotland's World Heritage Sites.

The World Heritage series now features two different five-pound notes. There’s a paper note and our new polymer note. The new polymer note has been launched to celebrate the 125th anniversary of the opening of the Forth Bridge. It’s the first fully polymer note to be launched in Great Britain. 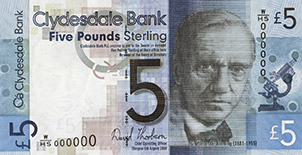 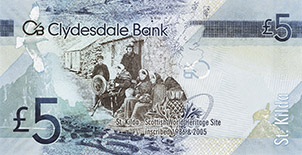 The paper note features a portrait of Sir Alexander Fleming, the Scottish biologist and pharmacologist. His discovery and isolation of penicillin led the way for the development of antibiotics, which have transformed the way modern medicine works. To date, estimates put the number of lives saved by his discovery at over 200 million. The reverse of the note features St Kilda, an isolated archipelago that forms the westernmost islands of the Outer Hebrides to the west of the Scottish mainland. It is one of only 24 places in the world to be awarded mixed World Heritage status for its natural and cultural significance. 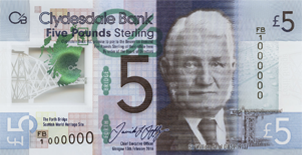 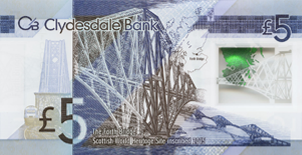 Our polymer £5 note initially entered circulation in March 2015 as a limited edition note to celebrate the 125th anniversary of the opening of the Forth Bridge. It was the first fully polymer note to be launched in Great Britain. The updated note is due to launch in September 2016 and will replace the paper £5 note. The notes feature Sir William Arrol on the front, along with the Forth Bridge and the Titan Crane. The reverse shows several images of the Forth Bridge. Sir William was a leading Scottish engineering pioneer and entrepreneur. He revolutionised the design and manufacture of cranes, heavy machinery, automobiles and steel bridges. His company built the Tay Bridge, Tower Bridge and the iconic Forth Bridge. The methods of working and techniques developed by Sir William Arrol are still used by engineers across the world today. The reverse of the note features the Forth Bridge, which has been inscribed by United Nations body UNESCO in July 2015 for World Heritage status. It opened on 4 March 1890, having taken eight years to build. It carries around 200 trains every day over the Firth of Forth and is recognised around the world for its stunning and beautiful appearance. It is now Scotland's sixth World Heritage site. 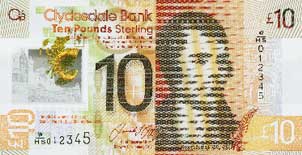 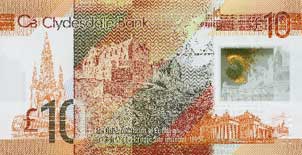 Our £10 polymer note entered into circulation in September 2017. It’s our second polymer note denomination to launch and features Scottish poet and lyricist, Robert Burns who was originally on our paper £10 note. The reverse of the note features the Old and New towns of Edinburgh, which were inscribed as a Scottish World Heritage Site in 1995.

The cleaner and stronger £5

We Care About Here

You are here:  We care about here  >  Strong foundations  >  The cleaner and stronger £5  >  Our banknotes through the years

An important change to regular payments

From 14 August, we’ll stop setting aside money for payments due on a Monday, which means the money will still be in your account over the weekend. Please ensure you have enough money in your account for Direct Debits and standing orders due on the Monday (or the next working day after a bank holiday).

Find out more about weekend payments

A new version of our app is now available – If you don’t receive automatic app updates, we recommend you update to the latest version now before proceeding.

An important change to regular payments

From 14 August, we’ll stop setting aside money for payments due on a Monday, which means the money will still be in your account over the weekend. Please ensure you have enough money in your account for Direct Debits and standing orders due on the Monday (or the next working day after a bank holiday).

Find out more about weekend payments